I am currently implementing a sun/shadow study interface. This will allow a user to define the 'location' of the current drawing, in terms of latitude and longitude. Using calculations from http://www.srrb.noaa.gov/highlights/sunrise/azel.html the position of the sun from any location on Earth, will be possible. We can then calculate the position of a 'shadowlight' and display that in real-time using the shadowing engine in the system. This can also be video captured to produce a shadow study.
at April 24, 2009 No comments:

Started working on a new animation control, that will bring together the various types of animations in the system. It is mainly going to be used for displaying real-time shadows, linked to the current drawing 'location', which is derived using a Google Maps interface (more about that later). This will enable users to do a 'shadow study'. It will also be used to control the video capture (and possibly the 3D sound interface) functionality.
at April 24, 2009 No comments:

Around 18 months or so ago, I decided to look at the 3D development within genes1s CAD. We were getting to a stage, where the 2D and database side of the system, was pretty much well developed, but the 3d component was certainly lacking in functionality, stability and extensibility.

I looked around for some suitable 3d engines. I have developed a 3D viewer for the system in Directx 8.1, but this was difficult to maintain and lacked in features. I came across the irrLicht 3d engine, developed by Niko Gerbhardt and after some initial testing, I decided to use this engine. We use the engine primarily for display purposes and don't really use many of the other features (like collision detection or 2D GUI) as that is already taking care of with the existing components of the system. It turned out to be a wise decision, as the irrlicht library has been proving to be excellent. We are currently using version 1.5. It is an open source project and long may it's development continue. It provides us with the ability to support a multitude of graphics subsystems, including DirectX 8.x, 9.x and OpenGL. There is also support for software only (BurningsVideo) drivers.
at April 23, 2009 No comments:

I want to write a lot more about the new developments in the system over the last 18 months or so, but recently I added support for 3D sound in the new engine, using irrKlang. This library is developed by Niko Gebhardt. He is well known for the development of the irrLicht 3D engine, that we use with the CAD system. We have recently upgraded to the Pro edition of the irrKlang library. Here is a link to irrKlang (and some of the other products that Niko is responsible for).

I thought it would be a good idea to start a blog about the various features and developments that is ongoing within the system. The one thing we have always been good at, is to development excellent products, but the one thing we have been pretty poor with, is to actually tell people what we are up to. Please visit this blog on a regular basis and see where we are going with developments in the various products.
at April 23, 2009 No comments:

Here I am showing how we can use pattern attributes to display objects using different colours. We are using an attribute called ROOM_USE to... 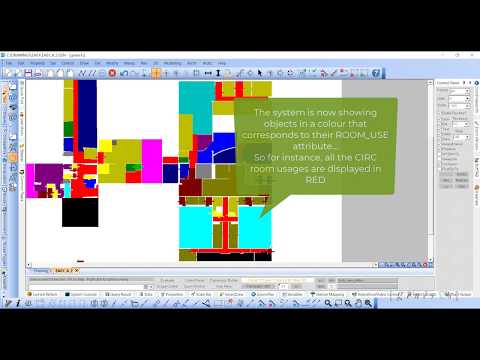 CAD Essence Development
Just a bloke that knows quite a bit about programming in C++.